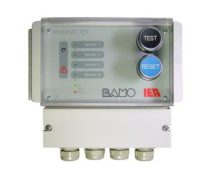 Bamo Measures Sas has been founded in 1978. Its capital is now 400 000 Euros. Since the beginning, the company has undergone a rapid development centring on industrial pH-meters and conductivity meters. Bamo is now well-known as a leader on the French market.

Since 1990, new developments in the Level Measure have given a new spring in the export. To its own production range, the company holds numerous agencies of foreign companies in Europe and all over the world. So we are offering a complete line with always the best possible service.

The device T has built in self test, survey of the connected sensors and the complete alarm processing – accordingly to approval guidelines for overfill sensors.

Note: The function test with the external push button does not replace the annual operation test.