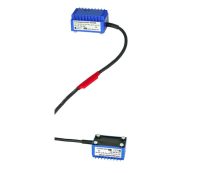 Bamo Measures Sas has been founded in 1978. Its capital is now 400 000 Euros. Since the beginning, the company has undergone a rapid development centring on industrial pH-meters and conductivity meters. Bamo is now well-known as a leader on the French market.

Since 1990, new developments in the Level Measure have given a new spring in the export. To its own production range, the company holds numerous agencies of foreign companies in Europe and all over the world. So we are offering a complete line with always the best possible service.

WM25 leak detectors are used for monitoring water leaks in rooms and retention basins. The sensor detects non-aggressive and electrically conductive liquids such as water. Installed on the floor, WM25 triggers the alarm as soon as the liquid reaches the electrodes. The adjustment screws allow to adjust the detection height.